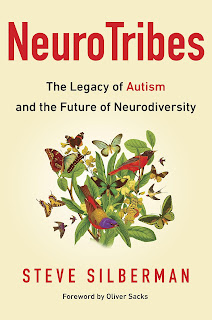 Hello all and welcome to a new installment of Aspie Book Club! Now, for those of you who have been following my blog from day one, you may remember a section I started back then with this name dedicated to profiling any and all books I come across on the subject of Neurodiversity and Autism. Well, it has been a few years since my last (and only) Aspie Book Club entry but fear not dear readers, for the section has returned from the dead! This time, I'll be focussing on a book which only came out a few months ago called NeuroTribes, by Steve Silberman of Wired Magazine.

NeuroTribes chronicles the history of both Autism and the various movements and initiatives which have risen around it throughout history. It is at once both sobering and inspiring, and though long-winded at times, it succeeds in presenting a chronicle of those on the spectrum throughout the ages, along with the responses of the scientific community to their existence. It is at times joyous and hopeful, at others dark and touching, but one thing it always is is powerful. I have always been a believer in Neurodiversity, but like most people I haven't always been aware of the history behind it all. Reading through NeuroTribes, I felt as though I was for the first time coming face to face with the history of my own people.

I can safely say, dear reader, that there were moments where I wept while reading this book, and yet others when I cheered proudly and defiantly for even the smallest victories achieved by autistics, aspies and those who advocated on our behalf. Perhaps one of the most poignant moments for me while reading this book occurred while I was working through the chapter on Hans Asperger. Silberman devotes much of the early part of his book to discussing Asperger's work with the children the author would come to refer to as “Asperger's lost tribe,” and this is done for good reason, as the good professor was working and discovering Autism during one of the darkest chapters of human history; the Nazi eugenics programs of the 1930s and 40s. In many way ways, Hans Asperger was to the Neurodivergent community what Oscar Schindler was to the Jews; a hero who saved whoever he could from the tyrannical hands of Hitler's National Socialist party.

The book also gets far darker, discussing the pathologizing of Autism by Leo Kanner in 1940s America, the cruel behaviourist experiments on autistics during the 60s and 70s and the rise of the anti-vaccination movement as a means of curing Autism during the 80s-2000s. It should be noted, however, that the night is darkest just before the dawn, and Silberman's book is no exception. The final chapters of his work illustrate the rise of the concept of Neurodiversity through such important figures as Temple Grandin and others who helped popularize the idea that autistics are not 'broken,' they merely run a different human operating system. As a result, this book is an emotional rollercoaster and an absolute page turner because of it.

NeuroTribes, by Steve Silberman, is therefore one of the best books I've ever read on the history of Autism and Neurodiversity. It was not only thoughtful and thought-provoking, but it also treated its material and the people being discussed with a sense of hope, love and respect that is so hard to find among many others who write about autism. Here is a book that, rather than portraying autism as a tragedy for parents and caregivers, tells the untold story of autistics themselves. While it's an emotional and at-times difficult book to read because of it, it is also powerful and optimistic. More than any other book I've read on the subject, this one made me feel like I'd come home. It was the story of my neurotribe, writ large for the first time. Silberman's book is a masterpiece, and has the potential to serve as the perfect manifesto for Neurodiversity as a whole.

Well done Steve! (Can I call you Steve? Mr. Silberman?)
Yours in Diversity,