Good evening to all of you out in internet land! Recently I, like many of you, have become a huge fan of the various movies and TV series published under the Marvel banner and based on their comic books. The stories are great fun, and after all, who doesn't remember growing up with the adventures of Spiderman, Thor, Captain America, The Hulk and other such mighty Avengers? In particular, Marvel recently released their Netflix original series Daredevil, and strangely enough it sparked some thought in my brain about how disability and neurodiversity tends to be portrayed on TV and in other media.

Surely, none of us are strangers to it. While watching a favourite TV show or movie, or reading a book or magazine, a character is presented who has a visible or invisible disability. Who doesn't love that? After all, its nice to see marginalized groups represented in mainstream media, isn't it? Indeed it is, dear reader, but there is of course a dark side to this. More often than not, media portrayals of things such as the autism spectrum tend to present aspies and autistics in one of three lights; negatively (the character lacks any humanity whatsoever), sympathetically, yet condescendingly (“Aww the poor dear, he struggles so much with that tragic condition!) or proudly, yet condescendingly (“We're so proud of him! He's come so far...you know...for someone with his condition!”) The point is, while media coverage is good, typically, mainstream presentations of autism and aspergers (and indeed any condition which differentiates people from the crowd) tend to reinforce prevailing stereotypes against those who are different rather than shatter them. 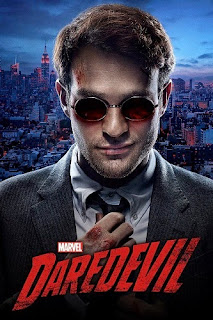 I could come up with a laundry list of fictional characters who fall victim to this trope, but thankfully one show's characters I could not lump under that group are those of Daredevil. Indeed, it feels as though the entire show is one big love letter to disability pride. Matthew Murdock, the lead character of the show and alter ego of the titular character, is an attorney working in New York's dangerous Hell's Kitchen neighbourhood, attempting to make things better for the people of NYC's impoverished areas. He is also blind, having lost his sense of sight due to a chemical spill at nine years of age. While in most traditional disability narratives, Murdock would probably be afforded sympathy by viewers and writers alike, this is not the case in Daredevil. As a result of losing his sight, Murdock has honed his other senses to a razor sharp degree, and uses them to effectively see without use of his eyes. This enables him to fight crime and bring justice to the people of Hell's Kitchen by night, while using his intellect to do the same thing through the legal system during the day. What I like most about Murdock's story is that it very much parallels the developmental path of many mild aspies and autistics (including yours truly). Essentially, while certain aspects of being on the spectrum are in fact a disability (seriously, being able to distinguish between angry face and serious face? Ugh!), it is never a black and white thing and also comes with many gifts. I can testify that in my own admittedly mild case, while I was slightly handicapped in reading emotional cues based on facial language, I developed my ability to analyze other aspects of a situation and so almost make up for it. I have my moments where I fail, but heck, even Matt Murdock still needs to read brail right?

And I haven't even gotten into the series' big bad yet... 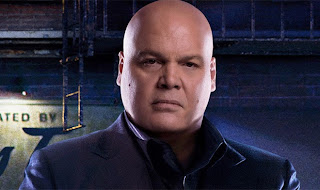 If the positive commentary on disability starts with the Daredevil himself, it reaches its next level with series baddie Wilson Fisk. Portrayed in the comics as the big, muscular bald and highly intelligent leader of New York's biggest criminal empire, the series' version of him follows almost the exact same path. Played by Vincent D'Onofrio on the Netflix series, the live action version of Fisk is also a recluse, one who is visibly uncomfortable in social settings and who, besides his close friend and assistant James Wesley and lover Vanessa, has no expansive social network and a very regimented daily routine.

In short, Fisk is on the autism spectrum. And I couldn't be happier about it.

Now, before any of you start screaming that making a villain autistic effectively ruins the reputations of anyone with any Autism Spectrum Disorder, hear me out. Yes, Fisk is a recluse. Yes, he is visibly uncomfortable in social settings, and yes he has a small circle of close associates, but these are never portrayed as any form of impediment to him. In fact, These traits, when combined with Fisk's clear and shrewd intellect, and his inner conflict between the moral and ruthless sides of his soul serve to make him one of the most interesting and, dare I say, human villains currently existing in the Marvel Cinematic Universe. In the end, Fisk has both good and evil in his soul, just as we all do. Whether neurodiverse or neurotypical, blind or able to see, we all have the conflict between two metaphorical wolves within us; one of good and the other of evil. The fact that Fisk is presented (though never announced on screen) as an autistic with the same inner turmoil and complex character development normally reserved for non-disabled characters is a beautiful testament to the fact that, whatever else we may have to deal with in life, we are all of us humans first.

Marvel's Daredevil is therefore a show that hits a lot of the right notes. While my inner geek is jumping for joy at its tie-ins with the greater MCU, my disability rights activist is also doing the same mental fist-pump for all of the positive portrayals of disability that lie within. It's a great show in its own right, and I seriously can't wait to see where the series goes (I haven't finished watching it yet!). Even still, there is something super compelling about the concept of a blind super hero with highly developed senses fighting the good fight for the poorest of NYC against an autistic villain who is brilliant, evil and a cunning crime lord while also being oh so human.